Posted on December 16, 2019 by Krysia Jopek
Posted in General | Leave a comment

Posted on December 14, 2019 by Krysia Jopek
Posted in General | Leave a comment

Posted on December 10, 2019 by Krysia Jopek
Posted in General | 5 Comments

Posted on December 8, 2019 by Krysia Jopek
Posted in General | Leave a comment

that desire to have things||

never shall be ¥ >> merely another

writing its poem; the once-homeless poet*

ground has shifted our

The final days of sum*

mer eluded. There was no

with a slight chill;

must clean the ga*

maths of objects and

This year, I swear

on my father’s grave–I shall

Until then, you can

find me on the

/21 [from] iterations of summer [september]

The holiday memo was email-bombed COB Friday to all

involved parties with some supervisors bcc-ed in, but none of

the workers fucking cared. Driving for too many days leaning into

the serpentine roads with cars following much too closely toward

a town that no longer existed, I texted you—asking to tape our worries //

splintered prayer boards to stones you should fasten to the hidden

river on the ancient map. . . but the cell towers were cluttered

of another DOUBLE set {double bubble*gum*

on the same fucking day—conducted with the skill of a

I was flying high on polyphonous frequencies—

talking much too fast//frenetically—before the

the catastrophic hurricane—for which the tourists weren’t smart

enough to evacuate. {When one pays for a desperately-

needed vacation on credit with 22% interest, the best

I was looking for the extra toothbrush for the

conscious—when you caught me off

of this six o’clock hour.

There are some things I need to

tidal wave*tsunami at the nu-

the frayed toothbrush through

/23 [from] iterations of summer [september]

The words were very hungry and, in turn, made the people who heard them hungry.

Some of the captivated audience would go for celebratory pizza and beer and talk utter bullshit;

others flew home in metal-boxes to their estranged spouses, disappointed children, mammoth TVs—

[or, maybe] the pages of the Book would locate and drown them;

sentences dangling them over the edge-plateau Abyss. There were

metaphysical moments a few in the crowd wanted to talk about,

but the words ran right off the page—like a watercolor

constructions might banish the evil spirits back to their proverbial, macabre forests—

but We can no longer see the trees; stuck in being [pronouns].

A sign on the door signals the baby is, at last, sleeping.

The writing on the wall promised the war in someone else’s country would still be going on;

but what, in essence, should a concerned citizen do—make a phone call, send an email,

text the netherworld; tell them to come fetch some of the complicit / colluded crew?

Time should be carefully allotted before it accrues, fools you.

It’s silly to remove the lower pillars of the shifting construction,

but the heavy-metal soundtrack, replete with a chorus of electric guitars and five mammoth drum sets

made it all seem somewhat, temporarily bearable—

before the crumble-shuffle cumulative shock effects; how dizzying!

You really should un-knot the plush, golden rope for the disaffected cat; tired, she lounges

all the neighbors of the disenfranchised global neighborhood [almost everyone]–

hanging on by a spider’s thread. Saturday’s fifth gear will dissipate

The cicadas will be even earlier tonight than the earlier earlier duskfall sky paintings, muted by cloud layers,

giving the illusion that all the pain is softer;  light traveling farther away to be closer to

Objects, adjectives, prepositions, and complicated ideas [the brain’s strange pictures edited by someone who went temporarily psychotic with the scissors and tape]

will be defined by what they are not.

July is not January; money is not water. 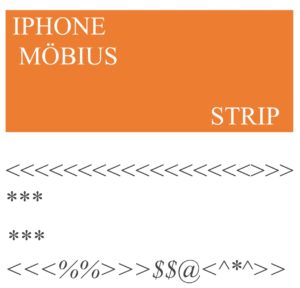 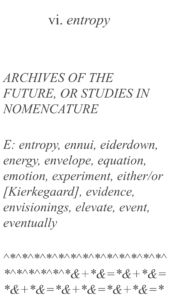 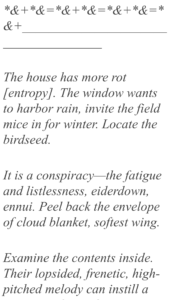 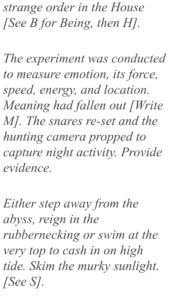 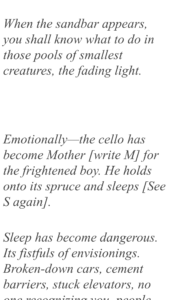 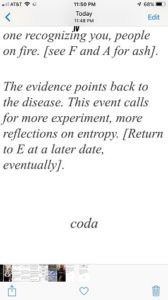 THE MUSIC OF LOSS

I lost the night, the skeleton key to my grandmother’s china cabinet, my shadow at the airfield when the military planes loomed overhead, the turquoise scarf my mother brought me back from Ireland last May, my resolve.

The notebook with all the passwords, the memo from my boss about tomorrow’s emergency meeting, the apricot dinner-plate dahlia tubers I dug up last autumn, my right to stay silent.

I lost my bearings out of the forest at twilight, my focus on the last star before cloud blankets settled in, the ability to stay composed during the police interrogation, my favorite photograph, my posture.

The sienna leather gloves you bought me, my father’s father’s chest of WWII medals, the note on the refrigerator to remind me of _______________ , my trust in the government, my belief in the media, my sleeping bag (the one with the broken zipper anyway).

I forgot the way to the secret cove at the shore, the obsidian rock covered in sea plankton. Where the spear fisherman, cherry-picking the taug taugs that taste like the lobster and crab they eat, scraped up his back on the rocks during high tide—and disappeared.

I lost the crystal earrings from Czechoslovakia, the large amber pendant (with insects stuck inside forever) brought to me from the open market in Krakow. The eyeglasses needed for driving at night, the valerian root that helps me sleep but often causes me to hover above my body, instead. The GPS that was left in the car before the crash, the TV remote on which the seven and nine do not click in, my social security card.

I misplaced the address to the place that was supposed to help me. The spare key to the shed where I didn’t mean to bury my best qualities, the lamp bequeathed by my favorite aunt, my convictions, my definitions of love and enchantment.

I lost my ability to do math. The ability to work in a cubicle of ticking clocks and unhappy workers talking to their estranged spouses at their tiny desks during lunch, consuming processed meat.

Gone, too—my favorite book bag, my mother’s first suitcase for nursing school with her maiden-name initials, my fear of heights, my self-consciousness, the newest set of paintbrushes, my ability to sleep so much.

Finally, I lost all my excuses for not trying harder to transform syllables into transformative music—a salve of some sort, to soothe the others.

written after Henry Jopek [my father] passed away on March 31, 2015

A private grieving finally alone in the House. Thank God. Birds sleeping in the rain

in barren trees of tiniest buds will eventually sprout magnolia and pear blossoms,

ladders of cathedral bells. No more PANIC of not being able to BREATHE properly.

The lungs washed clean by rain. The cloths of being unimaginable

for the lost waiting rooms–for the man who shrank

into a fracture of star.