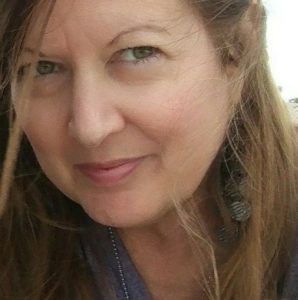 Krysia Jopek was born in Hartford, Connecticut. She holds four degrees: a B.A. and M.A. in English from the University of Connecticut, an M.Phil. (Master’s of Philosophy) in English from the City University of New York (CUNY) Graduate Center, and an M.F.A. in Literary Fiction from Albertus Magnus. She studied in London her sophomore year of college and attended Semester at Sea in Fall of 1988 before teaching English at City College New York (CCNY) from 1991-2001. The combination of her travels, education, and teaching experience informs her worldview and subsequently, her writing, with a global dimension.

Her first novel, poetic in nature, Maps and Shadows (Aquila Polonica 2010), won a Silver Benjamin Franklin award in 2011 in Historical Fiction. She is currently finishing her second novel, literary fiction, The Glass House of Forgetting. Her chapbook Hourglass Studies (Crisis Chronicles, 2017), a sequence poem in twelve sections, was nominated for a 2018 Pushcart Prize in Poetry. This small book was influenced by Rainer Maria’s short book, The Book of Hours. Her first book-length collection of poems, Sometimes to Breathe, is currently with potential publishers.

Krysia resides in Connecticut in her Poet’s Cottage with  T.S. Eliot (Eliot for short), an amazing rescue dog and her adopted kitty, Marina Farina Ballerina Snow. You can follow Krysia on Facebook on her personal page, her Krysia Jopek Author Page; her dog T.S. on his Eliot Jopek Faccebook fan page, and diaphanous micro on the diaphanous micro Facebook page (in addition to www.diaphanouspress.com). Feel free to email her via the Contact page on this website, if so inclined. She loves to hear from readers, former students, and colleagues in addition to friends (old and new).